Former A-Team teammate accused the captain of selling a slot on DPC: NA

Before the start of the second DPC season, a scandal occurred in the North American A-Team. Its captain, 🇺🇸Chad "Szabo666" Szabo, eliminated three players: 🇺🇸Raymond "AlienManaBanana" Milici, 🇩🇪Tim "TheBloodySky" Meese-Marktscheffel, and 🇰🇿Bekzhan "b1kA" Jandirov. After that, he was accused of selling the slot to Wind and Rain.

🇺🇸AlienManaBanana states that the captain received money from the Wind and Rain club's management for places on the team. Besides, all three former players were kicked out on April 6, when the North American open qualifiers had ended, and they all weren't able to participate in the league. The player provided a screenshot of his conversation with the team captain, where the latter confirmed that the Wind and Rain organization paid him for this. 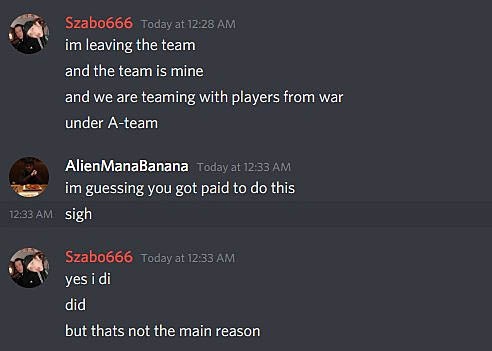 In the match of the Lower Division of Dota Pro Circuit: CIS Season 2, Team Empire lost the first map to Prosti Esli with a final score of 0:22, with no single kill. The map lasted almost 29 minutes.

A bug was in the I-League 2021 match between PSG-LGD and Elephant, due to which the match has been postponed.

Analytical agency Esports Charts has published research on the popularity of esports and streaming in the CIS for 2020 and a list of popular studios in the region broadcasting official matches.